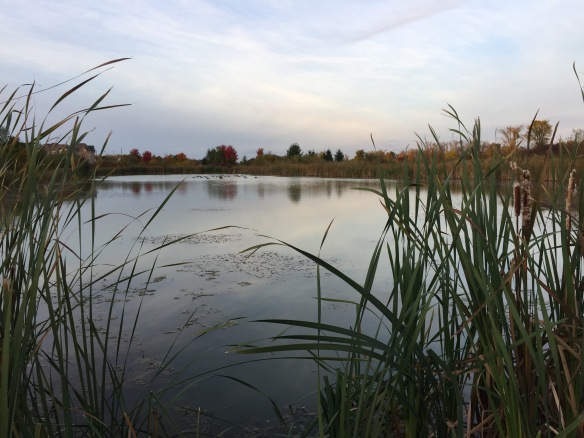 Listen to the sermon here

Watch the video that was shown in place of the traditional readings for Reformation: Thomas Berry and the Earth Community here

Despite the fact that my parents named me Dawn, I have never been much of a morning person. Those who know me well would probably agree that I should have been called Dusk instead of Dawn. But Dawn I am and so from time to time, I actually venture out to explore this phenomenon for which I am named. Earlier this week, after a long sleepless night, of tossing and turning, wondering and worrying, I decided that as sleep was eluding me, I might as well give up and get up. The sun was about to rise and so out I went into the quiet world of our little subdivision. We moved into our subdivision nine years ago. The subdivision was built about six years before we moved in, so our little community is only about fifteen years old. Before the subdivision was built, the land was used by a farmer to grow corn. On the fringes of our subdivision, they are expanding further into the cornfields. The neighbourhood is expanding, growing, and changing. The demands of modern life are encroaching on a lifestyle that is disappearing from countrysides all over the planet. Modern subdivisions are built to a pretty standard plan. Before the streets and infrastructure can be developed, some pretty basic problems need to be addressed, not the least of which is water run-off. As near as I can tell, modern developers deal with the problem of drainage by establishing ponds which function as catchment basins for rainwater runoff. At the foot of our subdivision there are four such ponds around which the developers created footpaths so that we suburbanites can at our leisure have someplace to take a walk.

When we first moved in, the ponds weren’t exactly picturesque. Just open pits into which runoff had poured, surrounded by paths and building sites. In the beginning these ponds were more like scares on the landscape and failed to inspire us to wander past very often. Indeed, if we wanted to take a walk, Carol and I would often get in the car and drive to a nicer spot to walk. But over the past nine years something miraculous has happen and in our neck of the woods Mother Nature has healed the Earth’s wounds and those ponds have become a favorite place to walk. Where once there was just muck and the open wounds of the Earth, now there are well healed pathways, beautiful bushes, fruit filled trees, and a whole host of wildfowl. Nature has repaired what we humans came close to destroying.

So, as the sun was rising in the east, I couldn’t help thinking about the natural rhythms and blessings of this life. And because I had been kept awake by worrying about the content of this Reformation sermon, my mind began to think about the similarities between the relationship of nature to the pond which humans created where once there was no pond and the relationship between God and the church humans created where once there was no church. END_OF_DOCUMENT_TOKEN_TO_BE_REPLACED

Listen to the sermon here

Watch the video that was shown in place of the traditional readings for Reformation: Thomas Berry and the Earth Community here

This morning we will gather at Holy Cross to celebrate the Reformation. Our liturgy’s theme is “Semper Reformanda: Always Reforming. As one of our Gathering Songs we will sing David Lohman’s hymn: “For All the Children”(PDF of the music here). We will sing this song of radical welcome for all those who have ever been excluded from the church in the hope that reformation will come quickly to the whole church.